There’s an issue with Twitter now, hope it will be resolved in a few days.

I’ve applied for the new developer account for @BazQuxReader. It could take several days for Twitter to review my application. Feeds won’t work until then.

I’ve also filed appeal for suspended developer account. But it took 4 months to unsuspend @BazQuxReader account so I won’t expect it to become unsuspended too soon.

If you have no email or username please mail support@bazqux.com with your Twitter account name and order ID (if you have one) so I could set up email login for you. 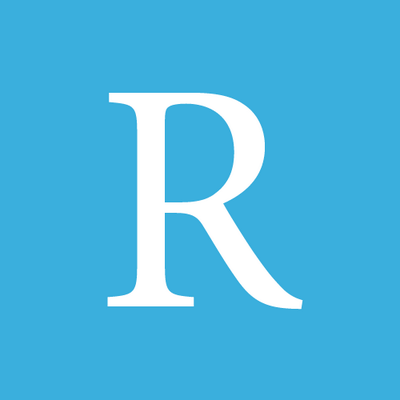 What’s the reason they suspend you or suspended you the last time?

They don’t say anything. Just suspend without any notification.

When BazQuxReader was suspended I haven’t even used it for a couple weeks before. Then 4 months later it was unsuspended without any notice.

And lately I had issues with sign in to my vshabanov account – Twitter said it need to call me (call, not SMS!) to say the login code and “call me” button didn’t work

(said “try again” no matter how many times I’ve pressed it). I’ve sent support request to Twitter about login issue and a week after it my account was suspended

I suspect that it somehow related to my use of VPN and maybe with troll farms fighting (Russian account with many followers from US and he uses VPN? Suspend!). Since Twitter says nothing it’s hard to know what the real reasons are.

If Twitter isn’t even helpful at all, it’s indeed hard to guess what’s even going on.

Hopefully it will be resolved soon.

Unfortunately Twitter hasn’t answered yet to my developer application. It took them 2 days last time. I don’t know how much time it will take now (they seem to work slower due to COVID).

I see. Looks like this one will take a while. Wouldn’t even be surprised if it’s not going to be resolved until next year. Thanks for the update.

Thanks so much for the frequent updates! Do you mind increasing your polling frequency of nitter.net in the meanwhile, as I have been using that as a somewhat serviceable backup?

nitter.net polling frequency should be no different from Twitter’s one. It’s not overloaded at the moment and updating fine so there’s no reason to increase polling frequency (otherwise BazQux could be banned by nitter for making too many requests).

Awesome! Thanks so much!

Howdy, I emailed support but found this conversation going so I guess I am being redundant

My twitter handle is Blacklistednews and just wanted to bug you because I love the service and use it everyday.

Thank you for the kind words. Yes, Twitter behavior is very strange.

This makes me realize now even more how great your Twitter integration actually works.

Keeping up with Tweets is such a hassle at the moment since I’m used to have everything at one place with BazQzux. The organization worked comfortably and flawlessly.

Meanwhile I looked into other feed reader and how they handle Twitter feeds or how they developed over the years, and I can tell you that they don’t even come close to your user experience. I got to say that BazQux currently is the most efficient feed reading service out there and unfortunately still is way to underrated or unappreciated.

BazQux was initially developed as comments reader (I wanted to read programming related discussions in LiveJournal and Reddit more conveniently). So it got interface optimized for reading many small comments. And I copied its layout from social networks (avatar, author and text separated by simple horizontal line) instead of feed readers (bulky rectangles with lots of buttons). So it’s much more convenient to read many short tweets in BazQux than in other readers (and actually it’s more convenient to read long posts too, especially after typography improvements ;).

I also have got to say that you did a great job with the mobile version. It’s such a seamless experience. I really enjoy browsing through my feeds on the phone or tablet. Every of my online activities is happening in or going through BazQux. It feels like a digital living room. A very comfortable place.

) and they don’t allow multiple applications for the same use case.

Let’s hope for the best

I am not sure if this helps you code a different way. See below: 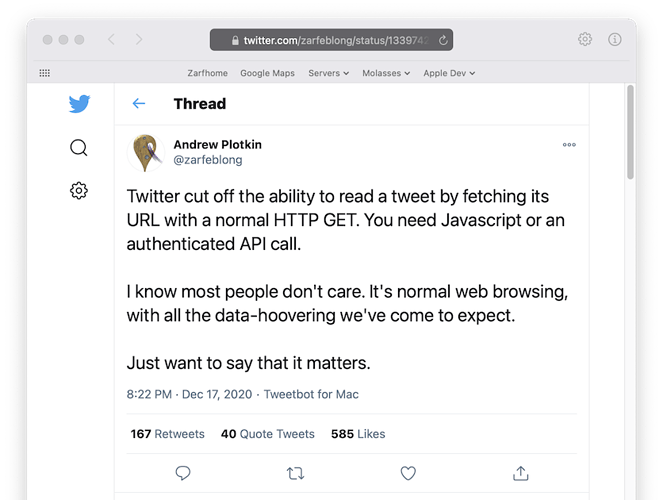 Yesterday I touched off a teacup-storm when I tweeted: Twitter cut off the ability to read a tweet by fetching its URL with a normal HTTP ...

I’m not using web scrapping to get Twitter feeds since it’s non-stable (feed fetching will break every time Twitter changes layout) and more complex comparing to API (and I suspect it’s not legal too). So I’m already using API and it’s access to Twitter API that was disabled together with my developer account.

I don’t think it worth to change Nitter icon to Twitter’s one. They’re different services.

I understand. Honestly I prefer using twitter to grab the content as you said things change and then web scrapping no longer works. The time has not given me much confidence that they will fix it without rate limiting. Regarding the icon, i knew you were going to say that. Just worth a try and ask. Hope they fix it soon and things are back to normal.